Dr. K. Sheldrake on Imam Hussain (AS) said this:

"Hussain marched with his little company not to glory, not to power or wealth, but to a supreme sacrifice and every member of that gallant band, male and female, knew that the foes were implacable, were not only ready to fight but to kill. Denied even water for the children, they remained parched under a burning sun, amid scorching sands yet no one faltered for a moment and bravely faced the greatest odds without flinching." 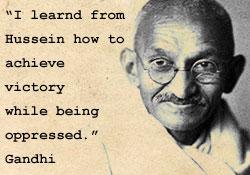 Arab historian al-Fakhri has said this about Imam Hussain's sacrifice:

"This is a catastrophe whereof I care not to speak at length, deeming it alike too grievous and too horrible. For verily, it was a catastrophe than that which naught more shameful has happened in Islam...There happened therein such a foul slaughter as to cause man's flesh to creep with horror. And again I have dispersed with my long description because of it's notoriety, for it is the most lamented of catastrophes." 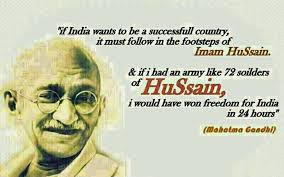 Imam Husayn uprooted despotism forever till the Day of Resurrection. He watered the dry garden of freedom with the surging wave of his blood, and indeed he awakened the sleeping Muslim nation.

If Imam Husayn had aimed at acquiring a worldly empire, he would not have traveled the way he did (from Medina to Karbala). Husayn weltered in blood and dust for the sake of truth. Verily he, therefore, became the bed-rock (foundation) of the Muslim creed; la ilaha illa Allah (There is no god but Allah).

Charles Dickens had said the following about Imam Hussain (AS):

"If Hussain fought to quench his worldly desires, then I do not understand why his sisters, wives and children accompanied him. It stands to reason therefore that he sacrificed purely for Islam."

thanks for sharing Ali bhai